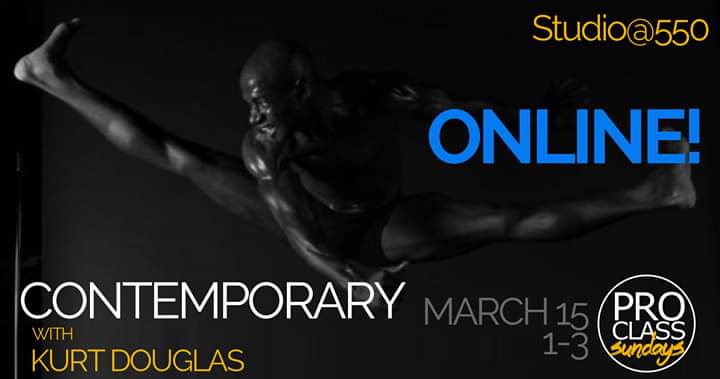 
Please do not show up to the studio for this class. This is an online class. Upon registering a link to the Google meet will be emailed to you. Be sure you register before 12:30 3/15.

Kurt A. Douglas is a graduate of New York’s LaGuardia High School of Music Art & the Performing Arts. Originally from Guyana, South America, Douglas earned a B.F.A. in dance from Boston Conservatory and an M.F.A. in dance from Hollins University in association with the American Dance Festival, Frankfurt Conservatory of Performing Arts, and the Forsythe Company. After graduating from the Conservatory, Kurt joined the Limón Dance Company, where he performed in many of Limón’s most influential works.

to perform for the royal family of Monaco. In 2007, Douglas became the first African American to portray Iago in The Moor’s Pavane, José Limón’s most famous work. Kurt was named one of Dance Magazine’s “Top 25 to Watch” in the January 2006 issue. He danced from 2002 to 2007 in the Radio City Christmas Spectacular, and joined Ballet Hispánico from 2005 to 2006 under the direction of Tina Ramirez. In 2009 he joined the Lar Lubovitch Dance Company during their 40th anniversary season, touring throughout the United States and Asia. In 2011 he began touring with the Tony Award-winning musical A Chorus Line throughout the United States, Japan, Singapore, and Australia.

Kurt Douglas joined the Boston Conservatory at Berklee faculty in 2015 where he is an instructor of technique, repertory, critical theory, and pedagogy for modern dance. Kurt also serves as artistic director for the Boston Conservatory at Berklee’s Summer Dance Intensive. Kurt reconstructed A Choreographic Offering for the Limón 71st Anniversary Season in 2017, and he continues to reconstruct and stage Limón’s work all over the world. Kurt also serves on faculty with the Limón for Kids Program and the Limón Institute in New York City, the official school of the Limón Dance Foundation.

Reservations are closed for this event.