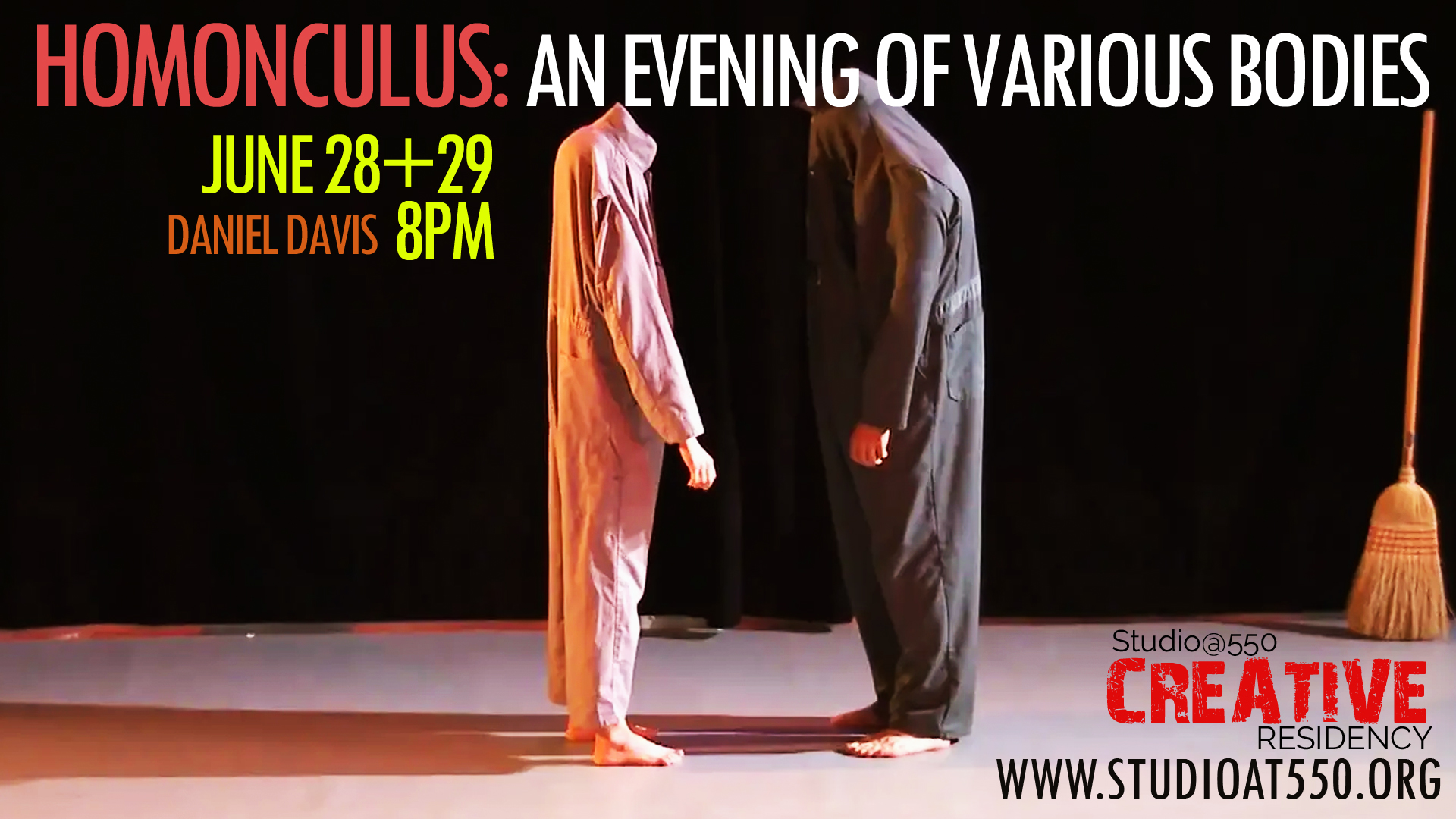 Des-Echoes is a complication of the Spanish, “desechos” – trash. rubbish. the cast away. Initially born at a performance jam led by Guillermo Gomez Peña and John Zibell in preparation for Glitch Body and Nanostalgia at UC Davis, this unwieldy image body has taken on a life of its own. The performers navigate, two bodies, in one cover-all work suit, in a constantly morphing negotiation of space, visibility, and identity.

This highly physical performance springboards off of the words of Karen Barard (On Touching – The Inhuman that Therefore I Am), in an investigation of what happens when theoretical words about bodies become bodies. “When two hands touch, there is a sensuality of the flesh, an exchange of warmth, a feeling of pressure, of presence, a proximity of otherness that brings the other nearly as close as oneself. Perhaps closer. And if the two hands belong to one person, might this not enliven an uncanny sense of the otherness of the self, a literal holding oneself at a distance in the sensation of contact, the greeting of the stranger within? So much happens in a touch: an infinity of others—other beings, other spaces, other times—are aroused.”

The constantly surprising stream of new bodies, formed from conventional objects, brings us into a morphing reality calling into question clear lines of self and other. We, multiplicities, in contradiction, choosing and casting away our various parts to shape ourselves to our imagination of our self. To be fixed, we are torn apart, conjoined,

Rhythm Reclamation Exorcises, Study #2 is part of a series of studies exploring polyrhythms in the body and how physio-emotional states transform through nuanced shifts in scale and emphasis. We are struck by the divorce from rhythm in the art fields descendant from post-modern dance – our own principle creative ancestry. How is this inheritance of lack (or even fear) of rhythm related to shame, trauma, and whiteness. In an attempt to dethrone the industrial rhythms of control – expressed in railway schedules, punch clocks, and marching rhythms, did we lose connection to the polyrhythms innate in the body, the turning of day to night, the seasons, oceans and myriad natural forms? How can we reclaim our polyrhythmic nature while continuing to embrace the freedoms and possibilities laid out by our post-modern inheritance? This duet exists in a series of solos, duets, and group pieces exploring these questions through highly physical performance scores.

Daniel is an interdisciplinary performance maker and movement educator, recently transplanted to Toronto. He has performed on submarines, desert rocks, construction scaffolding, and art galleries. His work has been presented at Performaticá (Mexico), The Imagining Bodies Symposium (Estonia), Dancing in Place Festival (Malaysia), the San Francisco International Arts Festial, SoWat Now Contemporary Performance Festival, and Looking Left Festival (California), and at the SEEDS Festival and E|MERGE Residency (Massachusetts). His recent performance work focuses on creating new communities through collaboration with marginalized populations engaging with personal content. He has had worked with veterans and non-veterans in collaboration with EchoTheaterSuitcase project, and in San Quentin Prison with The Artistic Ensemble. He has been blessed with opportunities to perform with Guillermo Gomez Peña, Nita Little, Nancy Stark Smith, Pipaluk Supernova/Live Art Installations, Felix Ruckert, Kira Kirsch, Avy K Productions, Scott Wells, and many other inspiring body/minds.

Caro is a Catalan artist-scholar-activist working at the intersection of dance, improvisation, installation, visual poetry, and text. She is a PhD candidate in Performance Studies at University of California, Davis. In 2011, she founded the internationally awarded and recognized performance project oncogrrrls -working around health issues centering on cancer and trans-feminism and has performed and presented work in independent venues, museums and queer festivals in Spain, Greece, Mexico, Colombia, US, Chicago, Costa Rica and France. Caro has choreographed for Annie Sprinkle and Beth Stephens’ film Water Makes Us Wet, presented at Documenta, and co/composed the performance piece Trans*plant, My Disease is an Artistic Creation with the performance collective Quimera Rosa. Moving into ecological engagements with more than humans, Caro’s current projects involve scoring dances with cows in collaboration with Toronto-born choreographer Kevin O’Connor, and a movement inquiry on the afterlife’s of silk-worms. She has collaborated and performed with Guillermo Gomez Peña and La Pocha Nostra, Jawole willa jo zollar, Liz Lerman, Dani D’Emilia, Post-Op, Cecilia Colacrai, and many other mentors and friends.

Anna M. Maynard (MFA) Anna’s creative inquiries span the media of improvisation, photography and performance art in works that probe the dynamics of interpersonal relations in dialogue with the world. She leads explorations of the concepts of accessibility, community, structures of power and body politics. With a foundation in classical ballet and an aesthetic identity anchored in contemporary dance, Maynard regularly attended the American Dance Festival and studied with Amanda K. Miller, Ishmael-Houston Jones, Jesse Zaritt, Gerri Houlihan and Jodi Melnick. Over the last year, Anna taught Contact Improvisation and researched the expansion of social norms in this dance form while traveling through Europe and Central America.

Reservations are closed for this event.